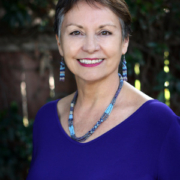 The disciple knocked at the door of the Beloved.
And a voice from within asked:
“Who is there?”
The disciple answered,
“It is I.”
The voice said,
“There is no room for two ‘I’s’ in this house.
– Rumi

This poem brings to mind a picture of Jesus knocking at a door, used occasionally by the Prayer and Healing Ministry at Unity of Tustin as a symbol of prayer and going within. It signifies Jesus’ instruction to go into our inner chamber and close the door. He also gave an example of prayer known to us as The Lord’s Prayer. And, as sometimes happens when a teacher gives an example, the example becomes the message. Somewhere in the translation and repetition its potency becomes lost. Prayer is so much more than words. Although I do not think there is a judging God who tosses out prayers not said just right. But Jesus had evolved to be One with His Father. His state of Being was one of Presence and this is the meat of his instruction about prayer. His life became His prayer.

Several months ago I had a dream where I saw Mary, Jesus’ mother, lying prone with arms outstretched above her head. Her fingertips were touching the feet of God, who appeared as a beautiful energetic field of Light. It was so beautiful that I woke up in tears. The feeling remained with me for days. I knew this dream was about prayer and about surrender. The dream gave me a picture or a touchstone to refer to that showed me to be one with God means the deepest surrender. True Prayer is about letting go. We let go of everything we think we know and sit silently in the Presence of Love (God). As we pray in this way, we change. That is what prayer does: It changes us. We let the world go and let the transforming spirit of God change us. Even when we are praying for someone else, we sit in the knowledge of their oneness in God. Then, there is no sickness, no guilt, no worry, no trying to change things, no scarcity, no sin, nothing but the Truth of Being.

There is a little booklet produced by the Foundation for Inner Peace called “The Song of Prayer” that says, “Prayer has no beginning and no end. It is a part of life…Everyone prays without ceasing.”

As a child I memorized my prayers and said them at bedtime. As I grew and experienced pain and hardship, I prayed many times throughout the day. For awhile, I stopped praying altogether. Mostly, prayer was something I did to ask for something. Then, through Unity, I learned the Fillmore’s Affirmative Prayer, which affirms the truth of our being. I learned that I was both human and Divine. This is where true prayer becomes a life choice. It is living Affirmative Prayer. I make the choice for God. I choose my Divine nature over my human nature, not negating it but aligning it. This is “the rest of the story” in Jesus’ teachings about prayer. He mastered His divine nature so perfectly that His mere presence healed. We have that capacity too. Have you ever sat with someone without speaking and somehow it was enough?

One day several years ago an inner voice said, “There is no other.” There is only God. If I truly know this, I forgive everything; I see the face of God in everyone; I accept whatever is going on in any moment; and I respond with Love. This is living true prayer. And I suspect that if we are like that disciple in Rumi’s poem who says, “It is I” there will be no response. There will be no other.

I am thrilled to be with you this summer! I am excited for Rev. Carolyne’s amazing sabbatical. May God within you thrive. See you soon!

Gail Hamley is a Licenced Unity Teacher and Ordained Ministerial Counselor through Pathways of Light. She is a hospice volunteer and facilitator of Transitions. She is a Reiki Master Teacher and published author of Life Expanded.

Gail’s passion is to help people discover their own power. Gail is a Native American (Chippewa) from the Turtle Mountain Reservation in North Dakota.
Gail will be speaking most of the summer on Sundays and offering classes focusing on prayer and meditation.

This site uses cookies. By continuing to browse the site, you are agreeing to our use of cookies.

We may request cookies to be set on your device. We use cookies to let us know when you visit our websites, how you interact with us, to enrich your user experience, and to customize your relationship with our website.

Click on the different category headings to find out more. You can also change some of your preferences. Note that blocking some types of cookies may impact your experience on our websites and the services we are able to offer.

These cookies are strictly necessary to provide you with services available through our website and to use some of its features.

Because these cookies are strictly necessary to deliver the website, refuseing them will have impact how our site functions. You always can block or delete cookies by changing your browser settings and force blocking all cookies on this website. But this will always prompt you to accept/refuse cookies when revisiting our site.

We fully respect if you want to refuse cookies but to avoid asking you again and again kindly allow us to store a cookie for that. You are free to opt out any time or opt in for other cookies to get a better experience. If you refuse cookies we will remove all set cookies in our domain.

We provide you with a list of stored cookies on your computer in our domain so you can check what we stored. Due to security reasons we are not able to show or modify cookies from other domains. You can check these in your browser security settings.

These cookies collect information that is used either in aggregate form to help us understand how our website is being used or how effective our marketing campaigns are, or to help us customize our website and application for you in order to enhance your experience.

If you do not want that we track your visit to our site you can disable tracking in your browser here:

We also use different external services like Google Webfonts, Google Maps, and external Video providers. Since these providers may collect personal data like your IP address we allow you to block them here. Please be aware that this might heavily reduce the functionality and appearance of our site. Changes will take effect once you reload the page.

The following cookies are also needed - You can choose if you want to allow them: